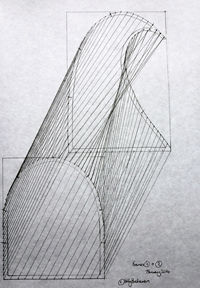 Be gentle sketch 1
This work was inspired by the unexpected flooding in the UK during the Winter of 2013-2014. The experience of defencelessness and vulnerability motivated the artist to try to take control by capturing the movement a wave but stopping just short at the very moment before it breaks. There followed days of calculations and as she schemed to trap nature she became part of a parallel experience. Early on several maquettes mysteriously kept rolling and lifting and she had to twist them with an opposing force to hold them down. The uncontrollable forces of these early waves signalled problems ahead. She made some simple adjustments to the designs, ratcheted up the tension and was only too happy to proceed, remaining high on the idea, but oblivious to the real complexity and power of the game at play! She became superstitious and kept the project secret. She began intensive industrial liaison to try to ensure the perfect manufacture of the supporting frames. But it was always a gamble with destiny; to tempt the power of a natural force and to see if she could "do it." She knew that she was not (herself) after all either a prevailing wind or a phase of the moon but a mere speck of a mortal compelled by her own volition. And apparently quite unknowingly this time, her free will had been completely taken up by this particular notion and her path, being already drawn meant that there was no going back. Brent ArtIsts Resource (BAR) conveniently facilitated a temporary studio space and this enablied her to rent a private workshop from the Meanwhile Space organisation. In retrospect, the blacked -out shop on a three week short-term let at Unit 3, Queens Parade in Willesden Green turned out to be the perfect shelter from the perfect storm, a safe space to make and a comfortable place to cushion her against the trauma of the "impossible task of the days to come." She worked through the night and she felt the tension of over 900 double thicknesses of thread gradually increasing the torque and by progression the structures slowly and inevitably contorted and twisted and repetitively deformed their shapes again and again and again. The wave progressions continuously resisted constraint; they were inherently unstable by their very nature and the real-life project was fraught with serious technical problems. After three consecutive attempts, it was clear that destiny was not a matter of trial or error, the attempt to capture this moment was becoming a battle of will, between stamina, endurance and time and the relentless and unforgiving power of natural law. As she threaded and rethreaded and pulled and pulled again, she learnt it was best not to pull quite so tight or to try so hard and she heard a voice in her head quietly repeating "Be gentle with destiny." She could feel the risk of project failure like a crushing weight on her shoulders and the tension in her neck increased the pain, but her patience was undeterred and the conscious efforts continued oblivious. By the end of February, exhausted she relaxed at last and then quite unconsciously she became gentle with destiny and the two life-size structures (whose final dimensions were dictated by the sizes of the external shop doors) emerged precariously into existence. The sculptures were immediately transported into safe storage, it was no mean feat; even this required 4 strong men and a 7.5 ton truck. But 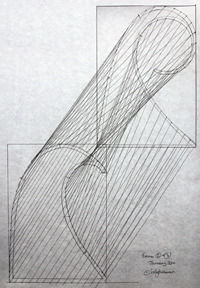 With destiny sketch 2
"with destiny" was still unsteady and a fourth re-thread was required. This included a stabilising tie which resembled a star linking the tension to a fixed point on the roof of the building. It was a fatal mistake; the external attachment could not confer independent integrity, since once unhitched, there was no cohesion and "with destiny" quietly rolled away and imploded. The work had to be rescued with the emergency use of some washing line tethering it internally to itself and stopping the inevitable tendency to movement; thereby making it safe for its first exhibition at The Art-itecture Programme Preview Opening Party at the BAR Gallery in June 2014. The Artist tried just once more to re-tension the work but this led to an acute vertical slant and when the sculptures were carefully moved to make way for other activities, the smallest nudge resulted in almighty calamity as an internal support rod slipped out of place and "with destiny" gently collapsed and broke once more. Over the next few days, the Artist embarked on a fifth and final re thread and this time, with no other options remaining she was forced to commit a most violent act by putting large metal bolts right through the frame permanently blocking the movement altogether.
The artist would like to thank BAR and Meanwhile Space and for their support and also a huge thank you to all of her trusted assistants at various stages and in particular the specialist factory in High Wycombe. See the full gallery "Be gentle with destiny" here.....more