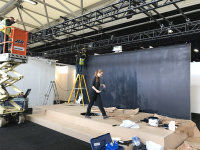 The Anthropocene is the era in which man’s activities are considered to be changing the nature of geology. The installation subverts different map conventions, reflecting both serious and satirical geo-political themes, it questions how we perceive and manipulate our planet.

The focal piece is the Polar Azimuthal Equidistant Projection, which is used for calculating flight paths and for seismic and radio work. It’s also the basis of the logo for the United Nations Flag and most ironically of all, it’s the contemporary “Flat Earth Society Map!” The Anthropocene radiates light and is suspended floating precariously above the void.....more