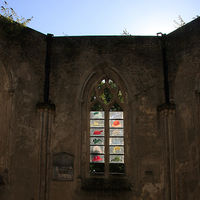 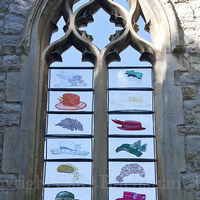 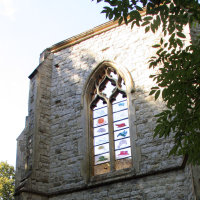 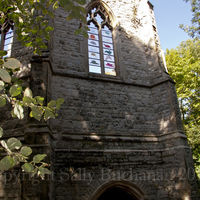 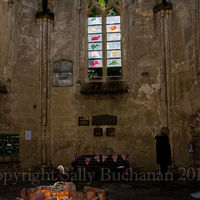 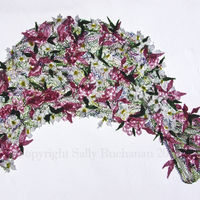 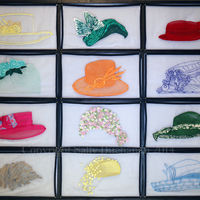 The first Installation "HighHats" was originally made
for The Diamond Decades Exhibition in The Chapel at Nunhead Cemetary
- in honour of Queen Elizabeth II's Diamond Jubilee. Organised and curated by
Jolanta Jagilello of Art Going Places and facilitated by FONC ,The friends of Nunhead
Cemetery, the show commemorated the amazing achievement of the Queen Elizabeth
II's Diamond Jubilee. This site-specific installation combined the traditions of embroidery and
stained glass windows. As you entered the chapel an empty window ahead provided an ideal
showcase for displaying some of hats worn by Her Majesty Queen Elizabeth II. Like an impossibly
high-hat shop window; the hats were framed and almost elevated to objects of worship. A selection
of hats worn by the Queen from each decade were enlarged and reworked. They became embroidered
lace facsimiles of themselves. Detailed, colourful, nostalgic, iconic contexts. The Queen is known all
over the world – for her hats - they act as her signature piece. Undoubtedly they serve to set her apart
from the crowd. It seems that her hats echo the fashions of the times and visually reflect both the rich tapestry of her reign and also
possibly serve to lighten the seriousness and the complexity of her many dutiful roles.The embroideries were later re mounted in
a simple wooden rectangular frame for subsequent display elsewhere.