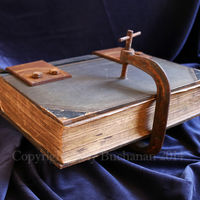 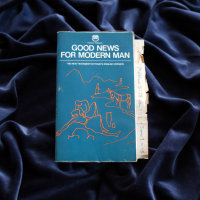 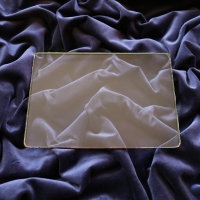 The Seven Deadly Virtues
exhibition was held in The
Nunhead Cemetery Mausoleum
in May 2013 with the support of
The Friends of Nunhead Cemetery.
7 different artists each
interpreted one of The
Seven Heavenly Virtues
in the past, the present
and the future and all
21 works were exhibited
together in the Mausoleum
at Nunhead. Chastity is
the quality or state of
being chaste. To be chaste,
one is sexually pure, decent
and modest, abstaining from
unlawful sexual intercourse.
Most religions dictate codes of
conduct with respect to sexuality and in
this way religion could be viewed as having
taken some responsibility for controlling virtue and sin. At any point in time, the artist regrets to say that the status of the Bible in our society reflects the status of the collective belief in both virtue and sin. A virgin is a woman of virtue; she is the epitome of chastity, as is the celibate. In most cultures and religions, chastity has always been venerated; virtue has served as a control on sexual morays, and in turn has acted as a control on society itself. Interestingly, the verb ‘to chastise’ means to ‘make chaste’ but this incurs punishment by severe criticism or by beating. In the past, the unchaste were chastised and they were brutalised. Organised religion condoned this. In the last century, Feminists have accused men of hypocrisy due to culture and society imposing their rigid conventions on women throughout history. The female was expected to be entirely chaste; this was a concept supported by a biased interpretation of various biblical passages in both old and new testaments. The Imperial Bible has been permanently closed with cast iron brackets and bolts, whilst the substance of the book itself has been pierced with a heavy clamp. This refers both to the obscene brutality of chastity belts used in the Middle Ages, as well as the metaphorical closure of the Bible itself. The work also reflects the contemporary contempt for religious values.Chastity declined after the advent of the sexual revolution and the invention of the pill in the 1960’s. The illustration on the cover of the Good News Bible (1966) was intended to depict the parable of the Good Samaritan, however its meaning can be disputed as the drawing could easily be misinterpreted as the depiction of a sexual assault.
Ironically the advent of free
love in the 1960’s was
indeed Good News for
Modern Man. This version
of the New Testament was
used in many schools and
ran to over 30 million copies.
Today our secular society
disparages the dominance
of any one particular religion
and there is a different
emphasis on sex education
and religious education in
schools. It is remarkable
that teenage pregnancy
rates in the UK are some
of the highest in Europe,
and the age of first inter-
course continues to
decrease. Will the future
bring us a world where
paper is only available as
an antique? Will Virtual
Bibles exist? Imagine the
invention of an interactive
reading device, a screen
that had 3D images
emerging from your hands
as you read. This invention
could become so convincing
that the reader would not be
able to distinguish the
device’s images from reality.
Being made from graphene,
the device would permit direct neuro-
stimulation, and thus would simulate any
physical experience you wished (without any real
interaction with another human being). One might be
tempted to think that such a conscious yet escapist experience
may negate the need to value the phenomenon of chastity in virtual
reality; that is, however, until you consider the inevitable implications of
experiential learning. Would this be equivalent to a testing out of experiential existentialism?