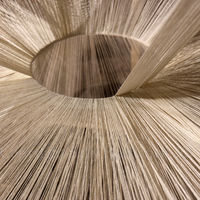 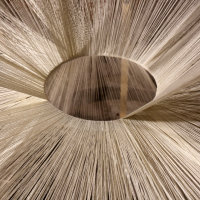 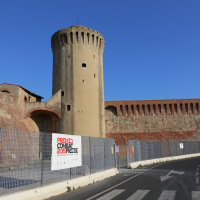 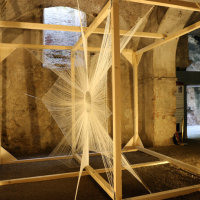 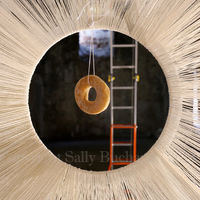 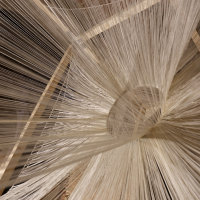 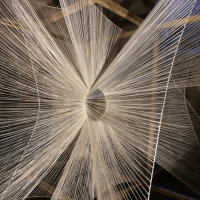 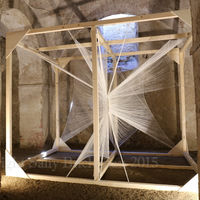 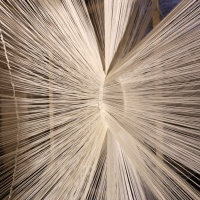 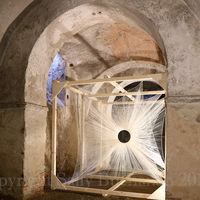 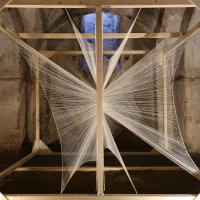 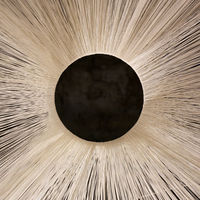 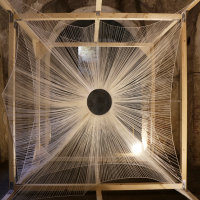 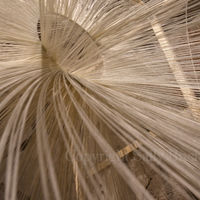 This installation used a continuous loop of thread to test out the dynamics of the hypothetical phenomenon known as the White Hole. In Quantum Loop Theory everything is connected, interdependent and interwoven. The specific conditions of the Sculpture and Installation category for The Premio Combat Prize 2015 held in The Fortezza Vecchia, Livorno Italy made it possible to realise this work in that space, at that time and in that form.
In our universe, a White Hole is thought to give out endless energy. The energy comes from a singularity far away in the infinite past. It is said that a White Hole is born from the ultimate point of collapse of a Black Hole which then bounces back and reverses direction in an irreversible dissipative process. The energy is continuously expanding and just like in our Universe, it begins in a time and a place that we can never reach back into and where we can never go. That’s why when viewed perpendicular to its point source, the centre of the White Hole appears Black. It’s all just an illusion…. or is it? The technical challenges of trying to contain the instability of such an entity and the impossibility of trying to defy gravity meant that this White Hole had to be captured, freeze-framed and suspended for a short time by a simple wooden structure. But really there is no direction, no size and there are no sides. It is asymmetric, illogical, gloriously irrational and divine. The doughnut shape forming the edge of its central ring is the event horizon, which is tight and compressed and this is the place where everything happens. The energy fields are delicately flowing and loosely imbalanced, just one little snip and the whole thing could collapse!
The installation is a blue print for a nature in which cycles of change and flux make space for the meaning of time. The concept of equal and opposite forces ignores the irrationality in the system caused by the existence of “the unknown other” which in this case preserves the second law of thermodynamics. This realisation actually releases us past the limits of rational thought. It gives out boundless energy and everything is going somewhere. The impossibility of reversing time maybe fantasy but a real White Hole actually contradicts contemporary theories of Relativity, Cosmology and Particle Physics. Its no coincidence that it should be cooked up in the particular old Medici Kitchen of the Fortezza Vecchia.
The White Hole remained in the Medici Kitchens until the 30th November 2016 when it was de-installed with the help of Port of Livorno Staff. The wooden framework is now safely stored at The Fortezza where it awaits a brand new project, once a permanent space can be prepared.

The artist would like to thank Stephen & Megan Taylor, Massimo Franceschi , Priscilla Morini and Daniela Pirisi.